Detector at the asymmetric electron positron collider KEKB at K

Collaborators at the department continued activities at Belle (Belle II) experiment on the electron positron collider KEKB (SuperKEKB) in Tsukuba, Japan. Main motivation of the two experiments, belonging to the so called Intensity Frontier Experiments, is searching for so far unknown processes and particles beyond the theory of Standard Model (SM) and is commonly addressed as the New Physics (NP). Intensity Frontier Experiments perform measurements of ultra-high precision in order to compare the results to equally precise predictions of the SM. The latter is nowadays considered as the most successful and experimentally verified theory of elementary particles interactions at the currently achievable energies and precision. NP processes must be responsible – among else – for the observed dominance of matter over antimatter in the Universe.

Detector Belle finished data-taking in 2010, numerous analyses of the data, however, are still in progress. Among the results of 2020 is the search for a hypothetical new gauge boson Z’ [11] (Figure 4). In the extensions of the SM the latter could be responsible for some discrepancies between the theoretical predictions and experimental results in measurements of B ® K(*) l +l - decays, as well as for the composition of the dark matter. 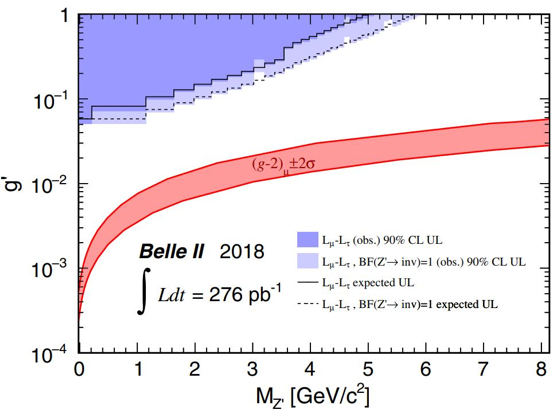 Figure 4. : Area in the parametric plane of hypothetical Z’ boson mass (MZ’) and its coupling constant to muons and leptons (g’), excluded at 95% C.L. by the measurement [11]. The red area (not yet experimentally excluded) is the region that could explain the so called muon anomalous magnetic dipole moment discrepancy.

Another high impact result of the Belle collaboration in 2020 was a new test of lepton flavour universality through the measurement of B→ D* tn [12]. The measurement was performed using the so called Full Event Interpretation in which one of the B mesons, produced in e+e- →U(4S) → BBbar, is reconstructed through its semileptonic decays B → Xcln (where Xc denotes any hadronic system composed of a c quark). This enables determination of the energy and momentum of the other B meson decaying into D* tn (t lepton further decays into a charged particle and one or more neutrinos). Despite the presence of at least two undetected neutrinos in the final state the method enables reconstruction of semi-tauonic decays and by this comparison of their rate to the rate of semileptonic decays into electrons and muons, B→ D* mn in B→ D* en.

European Research Council (ERC) advanced grant was awarded to the project “Flavour Anomalies with advanced particle Identification Methods (FAIME)” lead by prof. Peter Križan, a member of our department. Within this project the decay properties of B mesons into leptons will be measured with high precision. We will try to confirm or refute the preliminary results showing that, under certain conditions, tau leptons behave slightly different than muons and electrons. If confirmed, these results would mean a major revolution in elementary particle physics and in our understanding of nature in general. The crucial component of the Belle II spectrometer for the FAIME project are the charged particle identification detectors (Figure 5). A research group from the JSI, the Faculty of Mathematics and Physics of the University of Ljubljana and the Faculty of Chemistry and Chemical Engineering of the University of Maribor have played a decisive role in their development, preparation and analysis of data taken by these detectors. 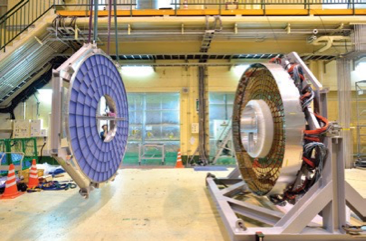 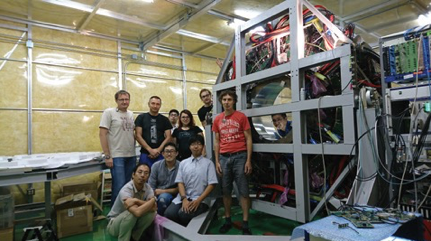 Slovenian-Japanese team behind the RICH detector where readout electronics with multitude of connections can be seen.