ATLAS explores a range of physics topics, with the primary focus of improving our understanding of the fundamental constituents of matter.

In the last two years an upgrade is taking place at CERN, as the Large Hadron Collider (LHC), as well as its detectors, are being upgraded before the next re-start, which gives us the much-needed time to analyze the data collected so far. The years 2015-2018 mark at CERN the data-taking period of the Large Hadron Collider (LHC) named “Run 2”. In the year 2015 the upgraded Large Hadron Collider LHC began its operation and reached the record center-of-mass energy of 13 TeV. The end of the “Run 2” of LHC operation subsequently finished at the end of 2018 with heavy ion collisions (Pb-Pb) at the center-of-mass energy of 5.02 TeV. The amount of the ATLAS experiment proton-proton collision data at 13 TeV in the year 2015-2018 reached the integrated luminosity of 150 fb-1 of exceptional data, whereby the LHC exceeded all expectations and facilitated the recording of the largest quantity of data at the ATLAS experiment so far. This set of unique data led to the most precise Run 2 searches of new physics beyond the Standard model hitherto achieved (figure 1). In the analysed data rare Higgs boson decays were detected for the first time ($H→ μμ, H→ Zγ$) , for a final confirmation of these measurements however more data is needed. In addition, a considerable number of different theories, which extend the Standard Model, were excluded and there are some indications for potential new discoveries in the particle physics – but for confirming or refuting these the full set of recorded data needs to be analyzed. Subsequently, the next year will still be full of challenges and expectations of pivotal events. In the year 2020 the ATLAS collaboration published more than 70 scientific papers in the most distinguished scientific journals, bringing the total number of scientific papers published by the collaboration to 970, with more than a hundred further papers in preparation. Some of the outstanding papers published last year are listed below [1-4]. 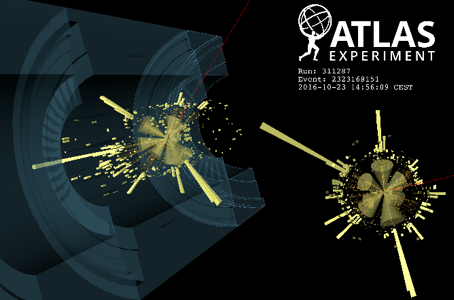 ATLAS Ljubljana group had a leading role in designing, building and operation of several beam and radiation monitoring systems, namely: ATLAS Beam Condition Monitor (BCM), Beam Loss Monitor (BLM), Radiation Monitor (RADMON) and Diamond Beam Monitor (DBM). BCM was built to monitor conditions of the LHC beams and issue warnings at unexpected and potentially dangerous situations. In the first part of LHC operation it served as the main luminosity monitor of ATLAS. BLM on the other hand is solely a safety system and protects ATLAS Inner Detector from potential damage by LHC beams. It fired few times and successfully extracted LHC beams and prevented potential damage to the detectors. RADMON records the doses received by different parts of the ATLAS Inner Detector. DBM was installed during the last shutdown and was used for the first time in 2015. It is built from pCVD diamond sensor and pixel readout chip with pixels of size 250x50 um2. It can provide luminosity measurement complementary to the BCM and other luminosity monitors in ATLAS. Its readout was firs tested during the last operation with beams.