ATLAS explores a range of physics topics, with the primary focus of improving our understanding of the fundamental constituents of matter.

In the year 2020 LHC was preparing for the new two years long data taking period “Run 3” starting in 2022. After “Run 3” a major upgrade of LHC to High Luminosity LHC (HL-LHC) will start and beginning of operation is scheduled for the year 2027. To adapt to HL-LHC conditions a major upgrade of ATLAS detector will be made. Large part of ATLAS collaboration, including the group from F9 department is intensively working on development and building of detector systems for the upgrade.

The group from F9 department has taken the leading role in the development of a new system to replace the current beam abort and luminosity monitors based on pCVD diamond sensors. A dedicated rad-hard ASIC readout chip for the new system has been developed, which will be used to amplify and discriminate the signals coming from segmented pCVD diamond sensor. We are currently in the phase of verifying the radiation hardness of individual components and planning the final architecture of the system.

High Granularity Timing Detector has officially become part of an ATLAS upgrade for the High-Luminosity LHC upgrade. The JSI group has taken a large part in development and testing of suitable Low Gain Avalanche Detectors LGAD (figure 2) for the HGTD as documented in publications [5-10]. We tested sensors from different producers and showed their suitability for the use in ATLAS experiment. The dependence of charge collection and timing properties of the sensors on neutron fluence were systematically measured. We contributed to development of different LGAD gain layer designs and showed the beneficial effect of carbon co-implantation to radiation hardness of the LGADs, particularly reduced acceptor removal. The effective inter-pad distance in multi-electrode sensors were systematically measured using Scanning-TCT technique. 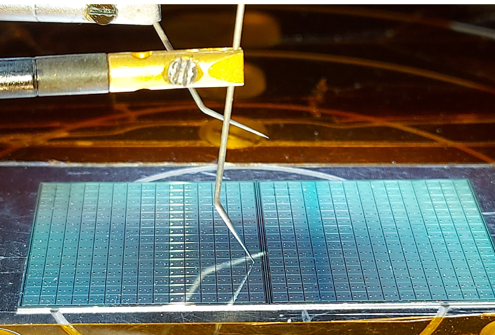 As the first we thoroughly measured the effects of annealing on the sensor performance and showed that the radiation damage in LGADs doesn’t depend on neutron flux.

In 2020, the ATLAS collaboration began assembling components to upgrade the inner tracking detector (Inner tracker – ITk). Silicon microstrip sensors will be used to track the path of charged particles. It is estimated that in the first pre-series production phase we will assemble about 5% of the components. Our group participates in the process of ensuring the quality of sensors (QA). At the reactor center in Podgorica, we will irradiate test structures made on silicon wafers with neutrons. Regular irradiations are planned every month for a period of four years. In a specially designed measuring system, we measure the response of sensors with the help of the Sr90 source and the ALIBAVA multi-channel readout system. All sensors from the pre-series show the expected degradation of the signals, the signal is reduced to about a third after irradiation with 1.6 1015 neqcm-2, this corresponds to about 7500 electrons. Measurements on pre-series sensors showed the expected results.

In addition to sensors development we took part in special multilayer flexible circuit development together with company Elgoline d.o.o. The circuit connects the sensors with peripheral read-out electronics and power for HGTD. The first prototypes were produced in 2020. In collaboration with Elgoline d.o.o. multilayer large dimension flexible circuits were developed also for ITk and their production has started recently. Together with Oxford University a robot (figure 3) for testing of these circuits was developed. Elgoline from Cerknica will produce more than 1000 such large flexible circuits needed for assembly of two endcaps of ITk. Each circuit will be tested three times in different stages of assembly process. 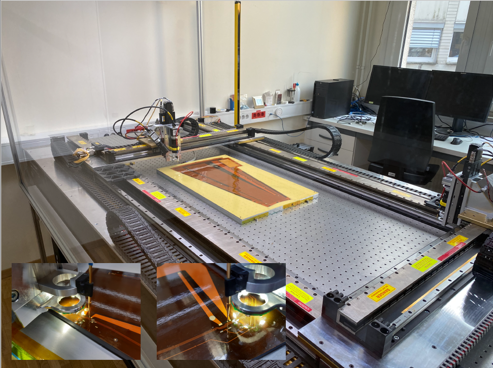 Figure 3. The figure shows two movable test stations, parts of the robot, with which the robot makes electrical contact with the circuit and measures its properties and detects any irregularities.

A system for online measurements of integrated doses (RadMon) will be installed in the ITk. In year 2020 our group designed and manufactured a prototype of ceramic printed circuit, sensors for measurements of ionizing doses (RadFETs) were tested and selected and design of readout circuitry was started.